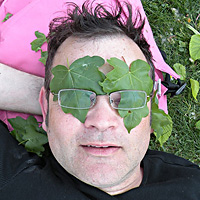 Stéphane Hette studied illustration and discovered photography by chance when he was 37. After a year of trial and error, he developed his own process to photography living subjects: he respects the environment and integrity of his subjects and uses only his patience and his knowledge of the species to take his photos. Since 2006, he worked on two paralell projects: "Colocataires" and "Les ailes du Désir". In 2007, several of his photos received many national and international awards. He was also invited as a "guest star" at the International Wild Life and Nature Photo Festival in Montier-en-Der (France).Between 2008 and 2010, the series "Les colocataires" and "Les ailes du désir" received 18 awards (including 14 public's choice vote) and 10 titles at the prestigious international contest PX3 2008 PRIX DE LA PHOTOGRAPHIE DE PARIS, His work on the butterflies named to " Zooms 2010 " by the show of the photography of Paris. 4m ² of nature is rewarded from 2011 in the Photos of the year.

His photos are published in several magazines such as Terre Sauvage, Chasseur d'Images, nat'images, le Figaro, Mankind and Nature (China), La Revue Française de photographie, the Bayard Press Group, Kaizen, La Salamandre (Swiss) ... Member of the OPIE* (France) and sponsor of the Lepidoptera Breeders Association (UK), Stéphane Hette protects and participates into the protection of the environnement and insects. He exhibits and publishes very often in France and abroad.

Stephane collaborates to the natural magazine "Nat' images" from the first day.

His photos are represented not the gallery Blin plus Blin and participates in the promotion of the Canson trademark Infinity worldwide.